Two key R design principles related to objects and lexical scoping are summarized in the following quote from John Chambers:

After some additional research (“Google is your friend…”) I located the original source of this quote, a presentation by John Chambers that was given at the useR!2014 conference.

What is an “object?”

At design / coding time we define classes in code, instantiate (load) them into objects, and instruct the objects to “do things” by calling their methods / member functions. The code we write is compiled and saved to disk so it can be executed. At program run time, the code is loaded into memory and executed.

Objects in S and R

In S, objects are stored at runtime in frames (which are in virtual memory) and databases (which may be on disk, or in virtual memory). This feature allows S to handle large amounts of data because an S program can use the disk to store the data, and only load small subsets when they are needed during a computation.

Practically speaking, one has to load objects that are stored on disk into memory, including functions, before using them. This is why one cannot access functions from previously installed packages (which are collections of related functions) without loading them into memory via the library() function before calling them.

If you print the code for the library() function, you’ll observe that it uses readRDS() to read the package content from disk into memory. As the serialized objects within a package are deserialized and loaded into memory, they are assigned to the hierarchy of environments, starting with the base or global environment.

Now we’ll address Chambers’ second slogan: Everything that happens is a function call.

This is a statement about behavior in R. All behavior in R is implemented through functions. This means that even things like the extract operator [ are coded in R as functions. By virtue of Chambers’ first slogan, we know that operators are also objects.

In R there are two “systems” for implementing object oriented programming concepts, the S3 system and the S4 system.

R is based on the S language. Development of the S language began in 1976 and has gone through four major phases, or “epochs,” as John Chambers describes in Chapter 6 of Software for Data Analysis. These epochs represent major changes in the ways that data and computations are structured within the language. All four are represented in R, as Chambers writes:

The next level of detail…

S3 classes: As part of the software for statistical models, developed around 1990 and after, a class attribute was used to dispatch single-argument methods. The attribute contained one or more character strings, providing a form of inheritance. Otherwise, the change to data organization was minimal; in particular, the content of objects with a particular class attribute was not formally defined. S3 classes are needed today to deal with software ware written for them (for example, the statistical model software (Section 6.9, page 218) and also for incorporating such data into modern classes and methods (see Section 9.6, page 362 for programming with S3 classes).

Formal (S4) classes: The S3 classes and methods gave a useful return on a small investment in changes to the language, but were limited in flexibility (single-argument dispatch) and especially in supporting trustworthy software. Classes with explicit definitions and methods formally incorporated rated into generic functions have been developed since the late 1990s to provide better support. That is the programming style recommended here for new software chapters 9 and 10, for classes and methods respectively.

This feature allows a developer to write functions within a function that can access objects defined in all of the parent environment(s) in the hierarchy between the child function and the R Global Environment.

The requirement that all R functions have pointers to their parent environments has desirable properties for statistical computing, such as the optimization example in an expanded version of Roger Peng’s lexical scoping lecture documented in a 2003 JHU Biostatistics class.

Because environments in R are hierarchical, I have found it helpful to understand their relationships through pictures. Here is an illustration of the environments for the functions defined in Johns Hopking University R Programming course’s lexical scoping lecture, slide 12. 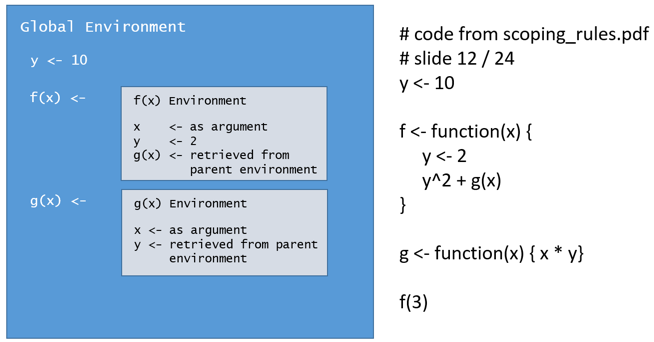 We can confirm the accuracy of the diagram by inspecting the Global Environment with the Environment Viewer in RStudio. 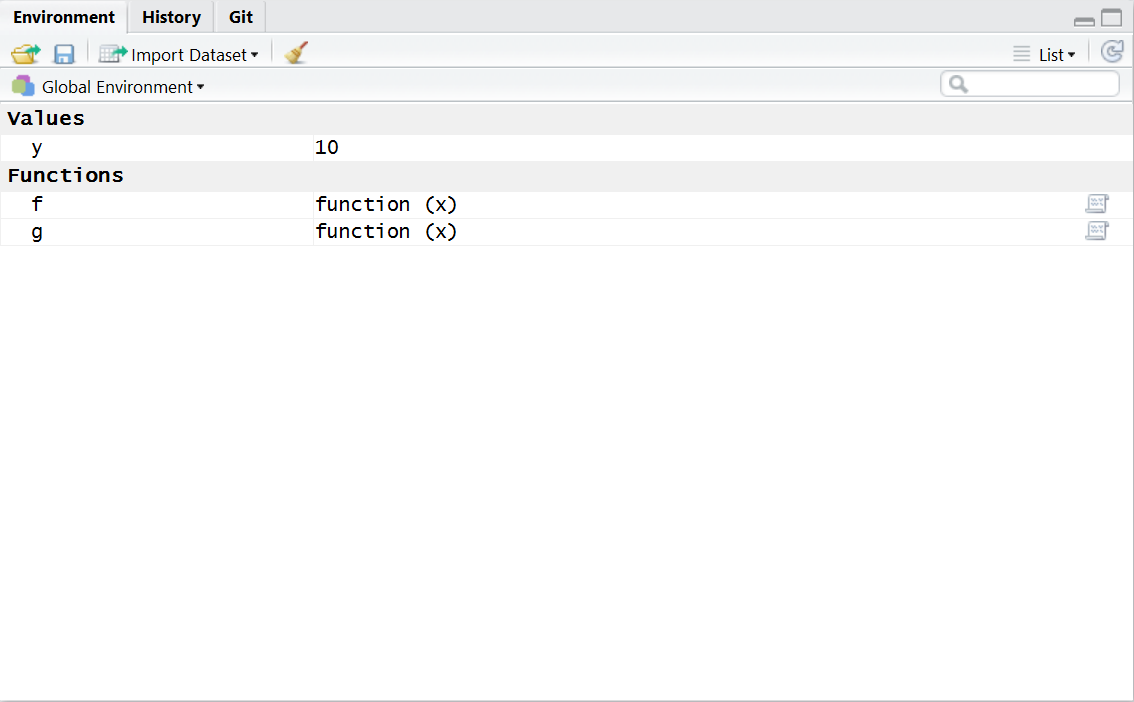 Clicking on one of the functions will display its code in the code editor pane of RStudio, allowing us to see the objects defined within the function. 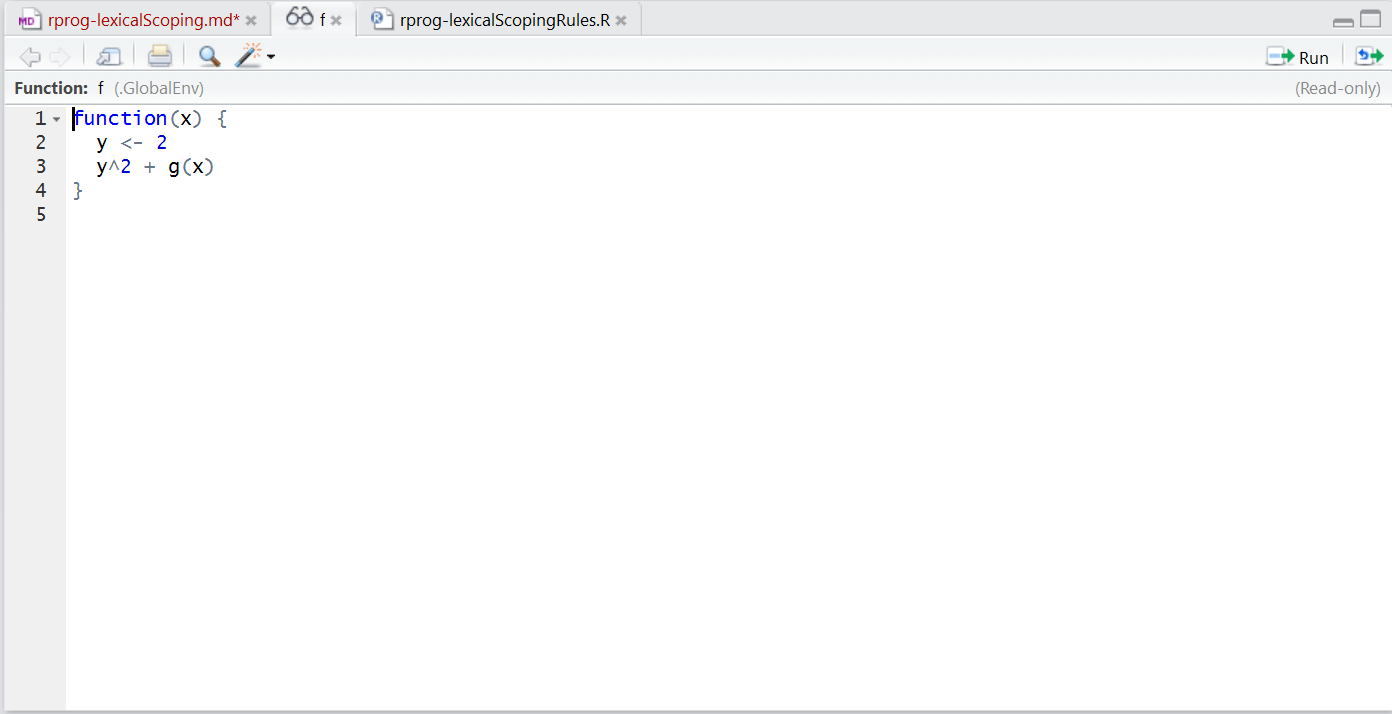 Appendix: what is a closure?

Closure is a functional programming concept that is central to lexical scoping. A closure represents the association between a function and its environment, including the local variables that are defined within its scope and the name or reference to which the name was bound at design time. Since anonymous functions are unnamed, they are associated with environments by reference.

A closure enables the function to access these variables through copies or references even when the function is accessed outside their scope, unlike a regular function that is defined without an environment.